Hey, Everyone! How did you spend your summers?  I am re-posting Summers on Grandma’s Farm from July 2016.

A gray barn like Papa’s. I took this picture near Springfield, MO.

When I was a girl growing up in south Alabama, my parents would take my brother and I up to north Alabama to attend Maywood Christian Camp for a week, and then my dad’s parents would pick us up and take us to their farm for another week.

My cabin at Maywood Christian Camp.

North Alabama is further from the Gulf of Mexico than my home town, thereby a lot less humid, which was nice!

I’m sure the first day back from camp was spent resting up, we would attend church on Sunday, and then the rest of the week was full of wide-open possibilities!

Farm equipment on my cousin’s farm. My cousin now owns my grandparents’ farm.

Grandma always took us into town, which is Russellville, Alabama, a much bigger town than what we were used to.

She would buy us each a toy at TWL, and we would go to a big grocery store.

Since my parents owned a general store in Jachin, we weren’t used to going grocery shopping, which was great fun! We loved to help pick snacks and sugary cereals that we would consume during the week.

Then we would head back to our grandparents’ farm, and eventually end up playing in their great big gray barn, which was stocked with hay, spider webs, and so much dust.

Our parents would come and get us at the end of the week.  We were always so glad to see them and missed them so much!

We would go back home to our own piece of Alabama, which had an entirely different culture and it’s own rendition of an Alabama farm.

Ice in the woods this afternoon.

So while Boston is languishing under 7 feet of snow, we north Alabamians get another miss.  At least where my family lives.

Lefty, Princess Buttercup, and I hope for snow.  We dream of snow.  We do everything short of praying for snow.

Princess Buttercup’s school was out for President’s Day, yesterday.  Every hour or so, she would ask Lefty and me, “Do you think it may snow?  Just a little bit?”

We grew tired of reminding her that we really didn’t know, the forecasters didn’t really know, and a snowfall was simply tricky to predict for our part of the state.  A friend of ours, who finished school in meteorology, once told me that the conditions had to be “just right” for us to get snow.  Something about our altitude, the sunshine, and temperature.

Really, Lefty and I like snow, too.  There are lots of adults in our area who enjoy seeing it blanket the dormant, brown grass.  It is so beautiful in the woods.

Tonight, according to weather reports, we have another chance to get it. 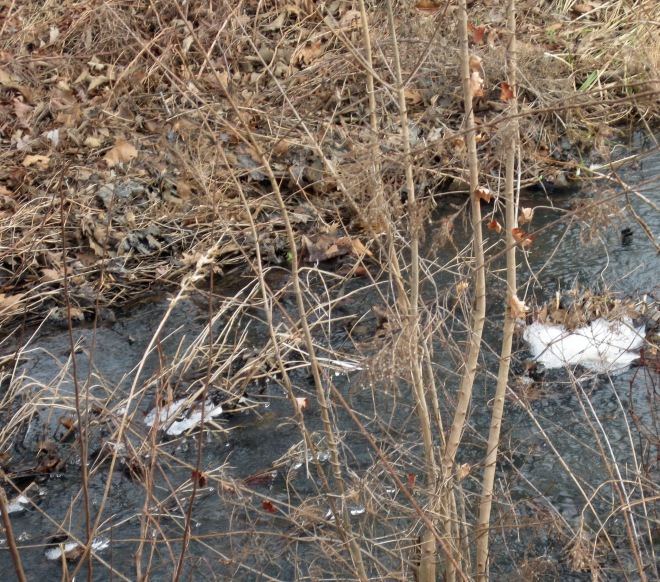 You can see a little bit snow (of what little we got last night) in this creek.