The big, bad green machine. Se the little key where you would load the stamps and then lock them up?

First of all, thank you to my seller friends at eBay for sharing their Green Stamps photos with me. I encourage my readers to go buy from these people if you are looking for vintage Green Stamps memorabilia. I am going to post their eBay sites at the bottom of today’s post. Also thanks to Meg at http://soupisnotafingerfood.wordpress.com/ for her vintage stamp machine picture. Please go visit her cool site when you have a minute.

Mom emailed me some information about Green Stamps that I thought you would like for Monday’s blog. Really, Mom is a great source about what went on in Jachin. For awhile, she wrote a column in “the Choctaw Advocate” that was called “Jachin Jots.” The “Advocate” was the local periodical that came out every Thursday. More on that, later. 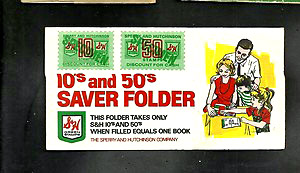 Here is what Mom wrote me after reading my Green Stamps post:

We bought S & H Green Stamps. We gave them to customers when they bought groceries. [For] a reward. For each dollar they spent, we gave one little stamp.

Since our rural customers rarely went to Meridian, MS, our nearest town with an S & H store, we would take their books in for them and redeem the stamps for a gift.

This was time consuming, but we wanted them to get sheets, pans and pots, dishes, curtains, etc., for their homes. I can still see Aunt Dossie with a paper bag full of S &H stamps.

She would rip them apart, wet them with a wet sponge, and stick them into books. We had a truck full of gifts when we got back home from that store. I’ll bet you and Ben went with me, too.

We also took Food Stamps. They were kind of like little Monopoly dollars. They could only be used for food. The customer separated the food items from clothing, medicine, gas, animal feed, hardware, etc. This was a bit time consuming, but no real problem. In later years, we also participated in the WIC program. I was teaching school most of the time, but (I think) this stood for “Women, Infants and Children.” The qualifying people would come in with a “voucher” to fill. 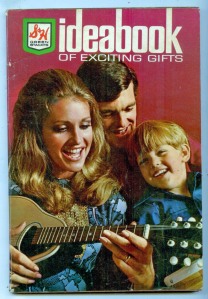 Check out this picture of the prize book. I’ll bet the model lady has never really played the guitar before. I play the guitar, and I wouldn’t attempt a chord with long nails!

Green Machine
Meg at Soup is not a Finger Food. What a fun blog name! More about Green Stamps here…
http://soupisnotafingerfood.wordpress.com/2008/07/31/sometimes-my-life-feels-like-a-house-of-cards/ Thank you, Meg!

The inside running board of our car still has some sand in it from a beach trip that we took a couple of weeks ago. It needs vacuuming very badly, but I hate to remove the last physical sign of summer.

Today was the first day back to school for my child. I hated to see this day come so soon. It has been a very fun summer with a lot of new adventures for Princess Buttercup, her dad, and me. It seems that school starts earlier every year.

I remember my very first day of school when I was a child. I had attended pre-school (we called it “nursery school” back then) and half-day kindergarten, but it was time for “big girl school.”

Grandma M had made my back-to-school jumpsuit. It had pale green and white stripes with a green iron-on decal that said, “Go!”

Mom put me on the bus as it stopped in front of the store. The “bus” was a big green and white van that a local lady loaded up with about 15 kids and drove us to our school near Latitude, Mississippi. Mom told me that I would ride the bus, and then she would come right away to join me. I suppose she wanted me to have that separation experience.

I didn’t like it. I was nervous with tummy butterflies. But I went, as I was told.

I know that I felt comforted when Mom showed up to take me to assembly. After talking to a lady on the other side of her for a while, Mom turned to me and said encouragingly, “Stephanie, this little girl’s name is ‘Stephanie,’ too.” I wasn’t sure that I liked that, but I was sure that I would be the other Stephanie’s best friend because of the commonality of our names.

First grade was quite the experience.

To this day, I remember the smell of the carton of chocolate milk that I had for snacks. I remember being switched with a small twig on my ankle, by my teacher…probably because I was daydreaming in class. I did that a lot. I’d a whole lot rather be out picking flowers in the pasture or playing with brother Ben than listening to my teacher talk on and on.

I didn’t like to hear the teacher yell, either.

During that school year, I remember being at a family gathering and passionately telling another little girl, “I hate school!” Mom said in horrified surprise, “Stephanie!” But I did. I hated it until I got to college. And that other Stephanie and I never hit it off like the friendship that I found in another girl and my “boyfriend” Shawn.

But I did make it through the school years with a solid education, which I am most thankful to have.

Now, I’ll be packing lunches and snacks for my daughter, just like Mom did for me.

And there are other summer vacations to look forward to. For now, I think I need to grab my vacuum and go take care of that sand. 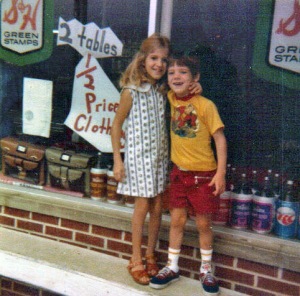 Waiting for the bus, in front of the store. Ben joins me a couple of years later. 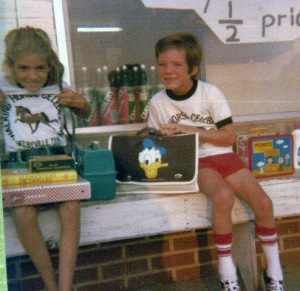 Another year of back-to-school.

Do the pictures in this post bring back memories to any of you?

If so, then you’ve taken a ride in a glass bottom boat at Silver Springs, Florida. I found this old picture in one of Gramma Findley’s albums. It was taken around 1973.

When Gramma and Papa Findley retired from the store, they used to take long trips in their Winnebago recreational vehicle. They seemed to be gone forever, when I was a child, and I missed them so much! After all, we had the luxury of them living right across the field from us, so we saw them pretty much all of the time.

So the album has quite a few pictures of their Florida trips, Florida not being more than a 3 or 4-hour drive from where we lived in south Alabama.

I remember gazing at the Silver Springs glass bottom boat souvenir picture all the time, when I was a little girl. At one age, I didn’t quite grasp the concept that Gramma and Papa were riding on the boat with total strangers. I remember constantly asking Gramma, “Who is this?” or “Is this Mrs. Black who goes to church with you?” Patiently, Gramma would explain that she didn’t know those people.

“Who is that little girl and boy? Is that cousin Gigi?”

“I don’t know who those children are,” Gramma would say.

For some odd reason, I still didn’t understand, which seems comical to me, today. Yet, I know how little kids can be when they run up against a cognitive block like that.

Later on, my family went to Silver Springs and got one of these pictures made. (I’m sure Mom has it somewhere.)

Wouldn’t it be so great if one of you in cyber-land knew some of these people in the Findley picture? Then I would finally have some peace.

Still, be sure to give me a reply if any of you out there remember taking one of these Silver Springs trips in a glass bottom boat.

Note: Click on pictures to see a bigger view.

Here is Papa and Gramma.

Here is the picture without the souvenir sleeve. Papa and Gramma are in the very back, to the left.

Mom with baby me in front of Gihon Grocery.

Microfiche Mommy here again. While I was looking through an old 1973 paper the other day, I found an ad for a 27000 BTU window-mount Westinghouse air-conditioner unit for $399.00.

That would be expensive even by today’s standards. Just goes to show how we southerners will pay dearly for our cool air and humidity controller. I know that I would.

See, I can pretty much deal with the heat, but I loathe the humidity.

When I was growing up in rural south Alabama, Ben and I would visit Gramma M in north Ala. She had one of those window units in her home (but maybe not a 27000 BTU Westinghouse one). We would visit her for a week after we’d get done with camp each summer. (Camp was in north Alabama, not far from Gramma M’s.)

We also had window units in the store, Gihon Grocery. We’d come into the cinder block store after playing out in the intense summer heat. It would feel like we were coming into Alaska, it would be so cold. Wonderfully cold.

Customers would come in with the door banging shut behind them. They all commented. Every last one of them, coming from outside. It didn’t matter whether they’d driven to Gihon Grocery in an air-conditioned Cadillac or an old Ford work truck with no windows. They all commented on the heat. Even if it was just a grunt and a shake of their heads in disbelief. We knew what they were talking about.

Ben and I’d grab a coke from the cold drink box, pop the bottle caps with the opener, and listen to the clink as the bottle cap landed in the catcher with the other pile of caps. We’d guzzle the frigid soda down, feeling the slow burn of the fizz down the backs of our dry throats. One of the store clerks would give us a tissue to catch the condensation and keep our hands from hurting from the coldness of the glass bottle.

We had been drinking the pop since we were little kids. I remember swishing the beverage around in my mouth to keep it from burning the back of my throat.

We’d hang out a bit, sitting on a vacant check-out counter, and listen to Aunt Dossie and Louise chat with customers. Then we’d go back out into the furnace of the outside to seek other adventures.

Aunt Dossie talking with Gramma Findley in the store.