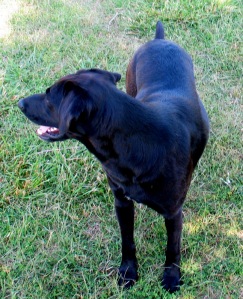 Samson got out of the fence this morning. I just got finished putting a bandage on the problem. Well, I hope it is a fix, actually.

Samson is our black lab mix that I found going through garbage on one winter morning. I may write about that story, later. We got Snuggles from the pound six months later, to keep Samson company. I thought he had looked lonely.

So this morning I woke up when I heard Lefty call, “Samson is out of the fence!” I got up to see what I could do, and Lefty was tracing our fence line to see where Samson could have gotten out. He had to leave for work, so I took over the job.

We had installed a nice, black chain-link fence after we got Samson. It isn’t as fancy as the pricey iron fences, which I would have liked, but it looks nicer than the aluminum-colored ones.

I tried Lefty’s suggestion: I walked out of our yard and called for Samson. Sooner or later, Samson wriggled his way under the fence.

I put him back in the fence, knowing that he would likely stay in the fence since Buttercup and I were up and about.

I did what we do whenever we have a question. I googled “dog gets out of fence and help.” There were some good answers. Many people suggested pounding tent stakes from the chain links to the ground. I looked up tent stakes and found some. Still, it would have been very expensive to get as many stakes as I would need to stake our fence.

So I got an idea.

See, coming from rural south Alabama, I tend to be very conscious about the environment. I am a real tree-hugger. I’ve seen forests stripped of its trees to go to the local paper mill. My parents didn’t do that to our land. They just wouldn’t.

A couple of years ago, when bag worms killed my Leland cypress trees, it broke my heart. I still have some of the branches left over.

I decided that I’d re-use the cypress limbs…the smaller, but sturdy ones. I chopped them into small sticks with points and used those as stakes. I staked the fence to the ground. Hopefully, they will look a lot nicer than tent stakes, and hopefully Samson won’t try to dig them up.

I’ll keep you posted on how it turns out!

The tools that I used.

Here are the stakes made from cypress.