Mom at the boat launch.

According to http://www.britannica.com, Tombigbee comes from the Choctaw Indian tribe word for “coffin makers.”

It sounds like the coffin makers were the tribal undertakers of their day. Their job was to clean the bones of their dead and lay them to rest in boxes.

I just found out this little tidbit of information, but if I had known this, I would have never dipped a toe into the Tombigbee River.

The Tombigbee River, a tributary of the Mobile River, runs through the county where I grew up in rural south Alabama. In fact the creek in our pasture runs off into the Tombigbee.

During the summers, it was the closest place to launch a boat. Being in the coastal plains area of the state, the shore had beautiful white sand bars where we liked to go to.

To get there, we traveled down the main road to Huckabee, turned off onto a county road, and finally turned onto a hard-packed dirt road to get to the boat launch. Oddly enough, the only local cotton field that I knew of at the time was along that dirt road.

It seemed like it would take forever for Dad to get the boat launched. We would sit in the boat, in the intense summer heat, while he and Mom backed the boat trailer into the muddy, brown water. Then it took a while for Dad to crank the thing.

Whir, whir, whir! He’d try again, working on getting the engine started. I watched as oil or gas swirled rainbow colors into the water. Note to self: I probably don’t want to eat fish from that river. 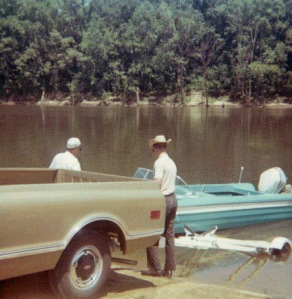 Mom wrote “old boat, new truck” on the back of this photograph.

Then we would ride in our boat until our faces were blistered and clenched from squinting in the bright Alabama sunlight. We would find a sparkling, white sandbar and swim until exhausted. Then we would ride some more in the boat.

Ben and I learned to water ski in that river. We didn’t go often enough to get any good at it, but I really did love to water ski. I had to learn to let go of the nylon rope when I fell. There were times that I forgot, and I got pulled under the water. There were times that I fell, and it felt like I broke every single rib in my chest. Still, I couldn’t get enough of it.

One time, one of our towels flew out of the boat. We watched it sink slowly, too late to go turn the speed boat around and rescue it. That totally creeped me out that something that we owned was going down, down, down into the deep…never to be seen again.

We once met some divers who had to go down there for some reason or another. They said that they could hardly see anything but mud.

I’ve also heard big fish stories. Make that “giant” fish stories. There is no telling what all is down at the bottom of that river. And I went over it with skis! It gives me chills just to think of it. {Shiver} The coffin-maker’s river.

I found some vintage Tombigbee River pictures that were taken before I was born. I can’t tell from the picture whether Papa Findley was teaching Dad how to ski, or if Dad was teaching Papa, but doesn’t Mom look cute in her little 1960’s swim get-up?

Samson got out of the fence this morning. I just got finished putting a bandage on the problem. Well, I hope it is a fix, actually.

Samson is our black lab mix that I found going through garbage on one winter morning. I may write about that story, later. We got Snuggles from the pound six months later, to keep Samson company. I thought he had looked lonely.

So this morning I woke up when I heard Lefty call, “Samson is out of the fence!” I got up to see what I could do, and Lefty was tracing our fence line to see where Samson could have gotten out. He had to leave for work, so I took over the job.

We had installed a nice, black chain-link fence after we got Samson. It isn’t as fancy as the pricey iron fences, which I would have liked, but it looks nicer than the aluminum-colored ones.

I tried Lefty’s suggestion: I walked out of our yard and called for Samson. Sooner or later, Samson wriggled his way under the fence.

I put him back in the fence, knowing that he would likely stay in the fence since Buttercup and I were up and about.

I did what we do whenever we have a question. I googled “dog gets out of fence and help.” There were some good answers. Many people suggested pounding tent stakes from the chain links to the ground. I looked up tent stakes and found some. Still, it would have been very expensive to get as many stakes as I would need to stake our fence.

So I got an idea.

See, coming from rural south Alabama, I tend to be very conscious about the environment. I am a real tree-hugger. I’ve seen forests stripped of its trees to go to the local paper mill. My parents didn’t do that to our land. They just wouldn’t.

A couple of years ago, when bag worms killed my Leland cypress trees, it broke my heart. I still have some of the branches left over.

I decided that I’d re-use the cypress limbs…the smaller, but sturdy ones. I chopped them into small sticks with points and used those as stakes. I staked the fence to the ground. Hopefully, they will look a lot nicer than tent stakes, and hopefully Samson won’t try to dig them up.

I’ll keep you posted on how it turns out! 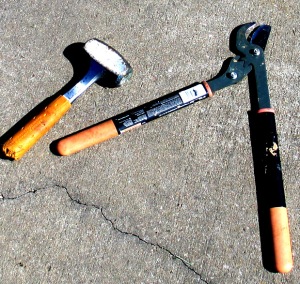 The tools that I used.

Here are the stakes made from cypress.

School is out! What wonderful words!

When we were growing up in rural south Alabama, Ben and I went to school near Latitude, Mississippi (name changed to avoid the unlikely scenario of me being sued).

As I exited the squat, brick building, even the air above me seemed lighter. The possibilities endless.

When we were in early elementary school, Mom would take us the rest of the way to Latitude. Latitude was a real town with buildings, the mall, and McDonalds! We would enjoy a feast at the popular chain and then go to a store to buy a kiddie pool.

One year when we were in junior high school, and Mom had started teaching school again, we got out of school earlier than Mom. We must have ridden home on the bus, because were home, alone. Ben took wild pleasure in tossing his papers and workbooks into our wood-burning stove. He lit a match…or a few matches… to torch the trash. I left him a few minutes but returned when I heard the fire alarm squalking. Instead of a nice, steady flame, the rubbish had burned out and churned out a room full of smoke. In a panic, Ben opened doors and windows so that Mom would not find out.

But she knew when she opened the front door.

When we got to high school and our parents had trusted me to drive our Chevy Nova to school (by this time, our school was much closer to home), Ben and I went to a drive-thru in Canterbury. It was one of those small-town hamburger chains…for some reason, I’m thinking that it was called “Wards.” So I was driving us. It was the first time that I’d ever driven us through a drive-thru. For some reason, I felt so funny ordering (rather than Mom placing the order), that I started laughing. Ben started laughing. We were laughing so hard that I couldn’t even order. I finally pulled myself together and placed our order.

Those are some of my memories of getting out of school for the summer. The pictures that I’m enclosing are of Ben and me at Silver Dollar City on a summer vacation trip. It is the Silver Dollar City in Pigeon Forge, Tennessee. Did you know that this is what the amusement park was called before it became Dollywood?

It’s interesting how north Alabama’s dialect differs from that of south Alabama. I can’t quite put my finger on it, but it’s definitely there. I’ve lived in both areas of the state. Mom is from south Alabama, and Dad is from north Alabama. When we visited my dad’s parents, we heard words like “greens” (for collard greens or collards) and ‘taters (for potatoes). North Alabama, after all, is at the foot of Appalachia. And I don’t think that I’ve ever heard a north Alabamian leave off r’s like in south Alabama.

I certainly had my twang, when I was growing up. I flattened my o’s and made my i’s into “ah’s.” When I got to university, some people thought that it was charming, but I wanted to change it. On the long, boring road from Gihon Springs to Tuscaloosa, I’d practice. I would pass a sign and work on enunciating the vowel sounds properly. I dropped the “y’all” and changed to “you guys.”

Thought I’d done a pretty good job of it until I visited Colorado Springs a few years back. “So, can you detect a southern accent?” I asked a CS native. “Ohhhhh, yes,” the woman answered.

Then there was last night.

I asked Lefty, “How’re you doing?”

He answered with a slew of things that he had done during the day.

“What?” I asked, wrinkling my nose. “I asked you how are you doing…not what are you doing. Why is it that people always start telling me what they’re doing when I ask them how they are doing???”

Lefty answered, “Well, you kind of slur the words together. It’s kind of like you say, ‘Hhh-wha’re ya doing?'”

By the way…how are you doing today?